In Pursuit of the Rare (Sailor inks)

I have been on an ink oddysey  of late, having spent the past 4 years or so in this hobby focussed almost exclusively on Italian/ Japanese fountain pens.  This was mainly a conscious decision on my part to turn my attention to the (somewhat!) less financially catastrophic pursuit of rare Japanese inks, and (hopefully) in the process save some money  for I don’t know…pension?  Sounds dull.

Inks are a fascinating area and I am a complete newby in this regard.  My ink choices thus far have tended toward the european, and mainly Montblanc, though i did get into Caran Dache a bit last year with a few of the Colours of the Earth series- Saffron, Sunset and Caribbean Sea.  I have also tried a few of the Omas inks as they came free with the pens, namely Turqouise, Green, Black, Blue/Black and Sepia.   Around 2015/16 I also bought a few BunguBox inks, of which I will be posting more reviews.  But other than that not much else.  But I plan to build up my ink knowledge in the coming months and years ahead.  We shall see.

In pursuit of the ‘rare’; Store-exclusive Sailor inks…

Thanks to Japanese shipping services such as White Rabbit Express, and also thankfully hitting a particularly abundant part of the year (Spring 2017), my pursuit of rare Sailor store- exclusive inks began on a positive footing.  ALL of the inks happened to be in stock.  So feeling myself particularly blessed, I went ahead and ordered 14 bottles of ink.  That is a lot.  But in my defence they were ALL in the in the (YES!) diamond shape bottles.  Also in my defence there were about 20+ other inks in diamond bottles  I could have ordered at the same time if I had less willpower than I do now.  I’m thinking in particular of Pen Cafe, Rihei and Pen Alley inks.  Of those in the regular flat bottle- Usagiya and SankoDo inks were also mighty tempting.  Usagiya was particularly tempting as the company is based in Okayama and they have a range of Okayama and Setouchi inks which depict the Seto-Inland Sea, a beautiful part of Japan, and one I was lucky enough to visit waaaaaay back in 2010.

I decided to focus my attention on three stores- Shosaikan, Ishida Bungu and Pen & Message.  The ink I was really after, unsurprisingly, was the shape- shifting/ colour- shifting Pen & Message Cigar.  I had recently received my bottle of the Sailor re-issued Rikyu-Cha, which had slow-boated its way from Japan via eBay a few weeks ago.  I was suitably wowed.  This is definitely MY kind of colour(s).  I know everyone says this, but really this ink must have been specially made for me, I think.

Anyway, I had read somewhere that due to the recent spike in interest in these bespoke Sailor inks in general, and the ones housed in the diamond shape bottles in particular,  many Japanese stores have issued a 1 bottle /colour/customer rule.  Given the likely high purchasing and shipping costs, I thought it better to buy the whole set (!) of Pen & Message inks, rather than just the one bottle of P&M Cigar.  I am glad I did.  Reviews will be coming up of all inks.  Needless to say there is wicked shading in abundance.  I also noticed a close competitor to Cigar in the form of Hakodate Gagome, or Brown Algae…

“Fourteen bottles of ink hanging on the wall,

fourteen bottles of ink hanging on the wall,

and if one ink bottle should accidentally fall…”

WTF?!!  Should accidentally fall?  Do you have any idea how rare and expensive this s*** is?!!

This is how they arrived all wrapped up- amazingly for 14 bottles of ink, not a single crack or spillage! 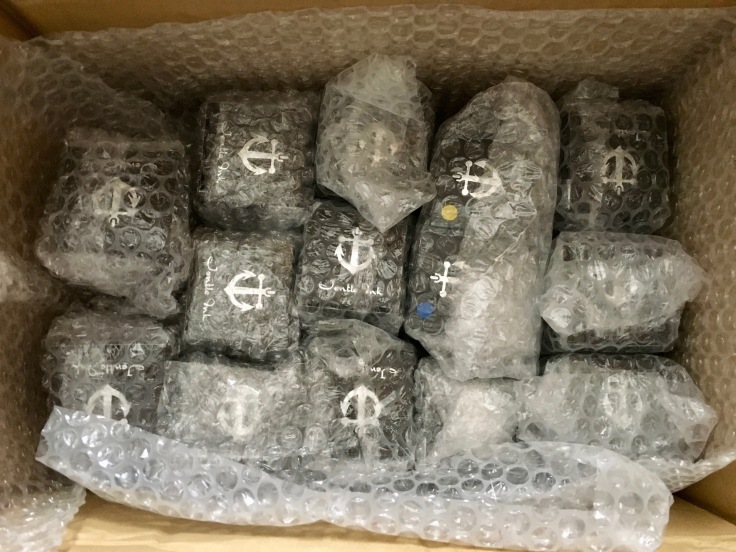 And here unboxed a little… 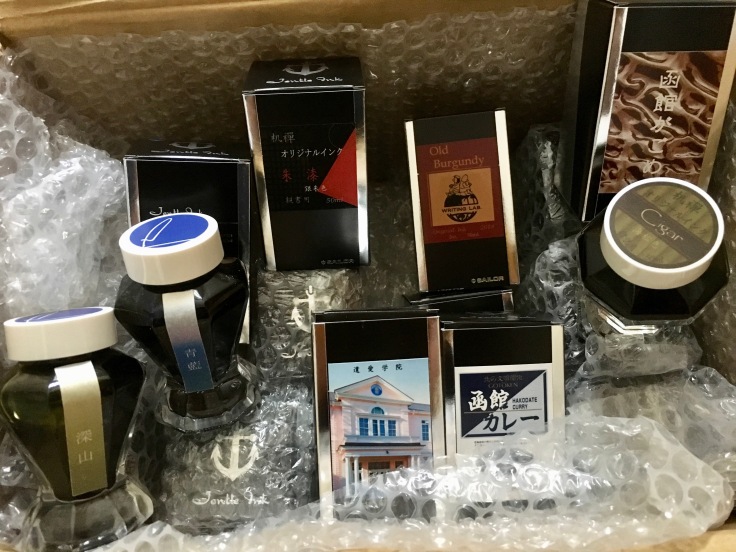 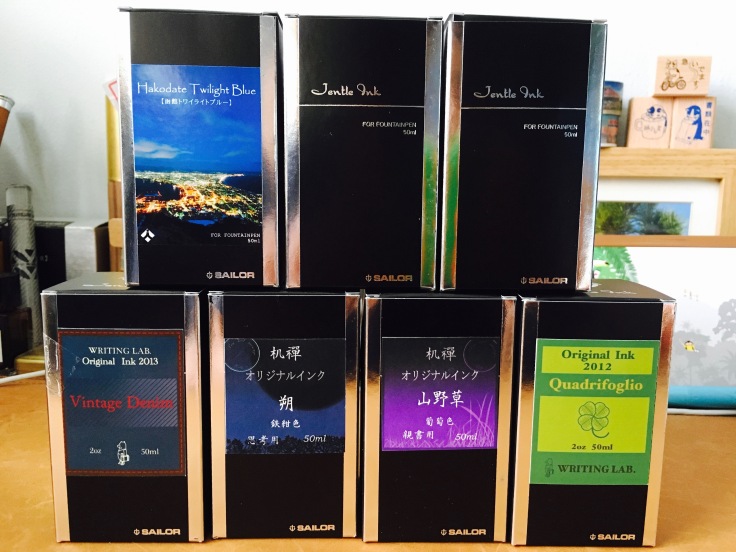 This ink is a colour shifting ink depending on the paper you use.  On Hobonichi TR paper it strongly resembles BunguBox Sweet Potato Purple with its purple- burgundy tones and sheen to green, and on Original Crown Mill white card it resembles the new BunguBox Ink of Narato, with its deep red and sheen to iluminous green.  A pretty incredible ink all round, but beware it can bleed through Hobonishi paper.  To be safe I will use it exclusively in the Jinhao X250 I currently have it loaded up in.

Check out this ink on Hobonichi TR Paper…looks like Sweet Potato Purple, but even sheenier!

I don’t have many burgundy inks, and way too many blue inks, even though I don’t consider blue I colour I like.  So I was happy to ad Old Burgundy to my cart, along with the other 6 P&M line inks.  In addition to the bottle, I love the labels on the cap and box.  As you can see, this was one of the three inks P&M created in collaboration with Writing Lab.  The other two being Vintage Denim and Quadrifoglio.  I haven’t used this ink much so I will do so in the coming months and report back, together with comparisons of other burgundies such as Kobe Maroon.